The Chordsmen sing in TOTAL VOCAL at Lincoln Center 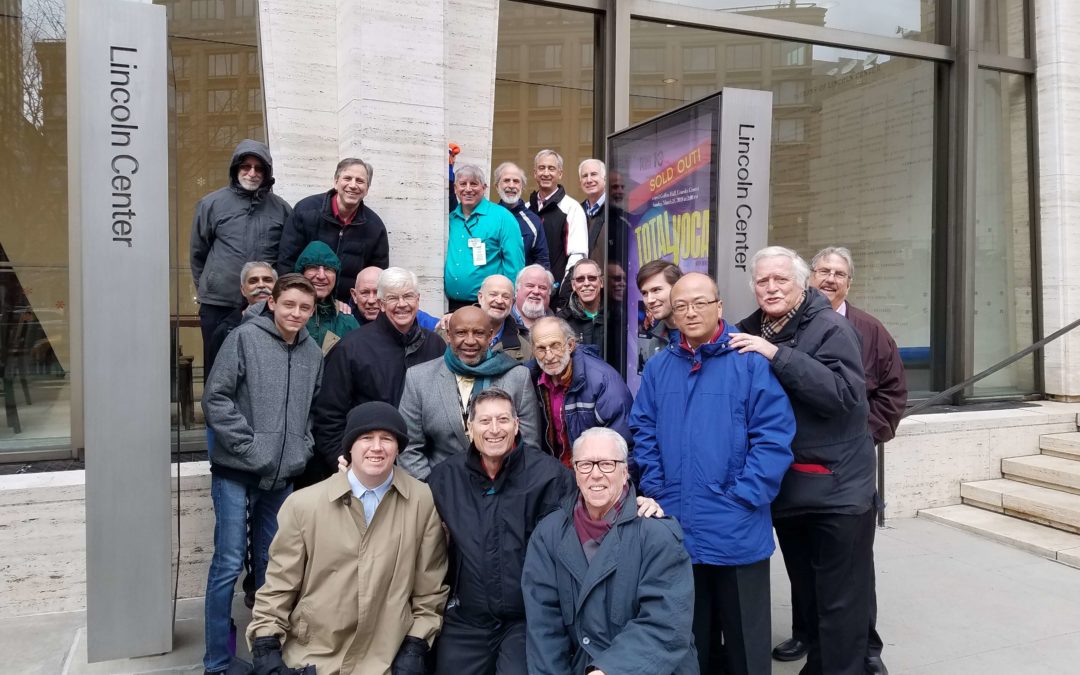 (the following is a recollection of the Chordsmen’s appearance at Lincoln Center’s David Geffen Theater in TOTAL VOCAL, a Distinguished Concerts International, New York (DCINY) Production by member Stephen Bartell)

What an amazing weekend; it was starting on Friday March 23rd.

We arrived for our first rehearsal just before noon at a hotel in mid-town. Twenty-five Chordsmen joined 225 other singers from around the US and the world to rehearse ACT 1. DCINY organizers arranged us by height across about 30 rows to mimic the arrangement that would be on stage. [There was another rehearsal of the other “half” of the chorus that morning for ACT 2; another 275 singers!]

Then Deke Sharon, the world-renowned arranger, composer, choreographer was introduced to thunderous applause that didn’t subside for quite a while. He jumped into rehearsing us immediately and didn’t stop his high-energy and positive coaching for the next four hours. If I had thought about it, I might have felt tired, but working with Deke is such an invigorating experience, I was excited instead.

Saturday was an early day, starting at 8:30 am running til noon. Again, the entire group was very excited and enthusiastic, worked hard and left feeling mostly prepared to perform.

Sunday morning, we all met outside David Geffen Theater’s stage door, but had to wait. So, we went around the corner to one of the posters for TOTAL VOCAL for a group picture. (Notice the top of the poster says “SOLD OUT.”)

Once inside, we met up with the other singers, all in our Dress Rehearsal outfits. Quite a mix of styles and colors (though the Chordsmen had chosen pastel-colored shirts and black pants…turned out to give us a distinctive look on-stage amongst the mostly black outfits of the other groups).

We had some time before going on-stage to rehearse and do sound-checks. This was filled with random singing by several groups, including a couple of women joining the Chordsmen in a song or two that they knew.

On-stage was remarkable. We all really got an idea of what a 3,000 seat venue was like and the sound we would be filling it with. [NOTE: the Chordsmen had been featured alone in Carnegie Hall in 2012 in a concert with a Japanese organization. A remarkable experience also where we received a standing ovation at the completion of our 6-song set.]

After the sound-check, we broke for lunch then returned at 1:15 to get ready to go on. The anticipation was intense, everyone was keyed up to perform. Then, the DCINY staff announced we were to proceed to the stage (walking up a series of staircases til entering through a backstage doorway, directly onto the risers.
The audience was mostly in place, so we received applause on entering, especially when they saw all 250 of us on the risers. Deke was introduced and we jumped in our set, with occasional interjections of individual a cappella groups and featured guest beat-boxers.

In what seemed like a blink, we were done and exited. As we descended the many staircases we had come up, the second act singers lined the walls, applauding, smiling and congratulating us (many had been able to see and hear us on tv screens place around the backstage areas.).

Back in our ready-room, we chatted about the experience and used our phones to go to a website that live-streamed the performance of ACT 2.

The DCINY staff again entered and led us to the lobby area outside the orchestra seats, lined us up and readied us for the finale. When the cure came, the back doors of the orchestra seating area were opened and we “streamed” into the hall, down all the isles until we surrounded the audience, singing the (almost) final song and clapping to the beat. The applause was deafening. The Deke started singing the high alto part of “The Lion Sleeps Tonight” which we all joined (all 475 singers and the audience!) What a sound!

We exited quickly so the audience could and returned to the ready room to get our stuff and leave, still reeling from the remarkable experience. We exited to the Lincoln Center Plaza by the fountain and met up with a number of the barbershop choruses where we sang our “theme” song “Keep the Whole World Singing.”

We are thankful to DCINY and particularly Deke Sharon how personally invited us to be there. Apparently, there is a good possibility we will be asked back again next year.

(click on the images below to get a good look at the smiles on our faces!) 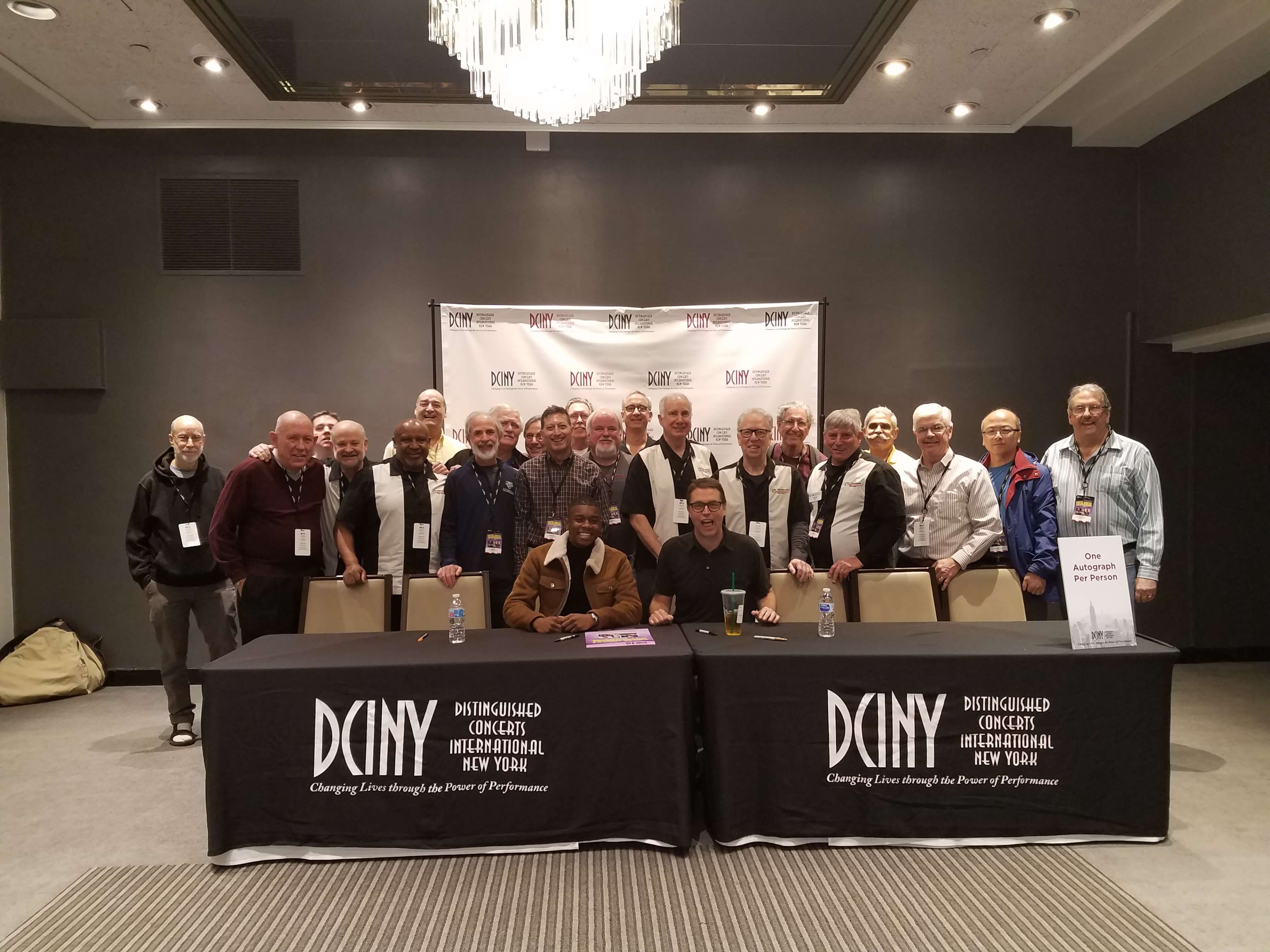 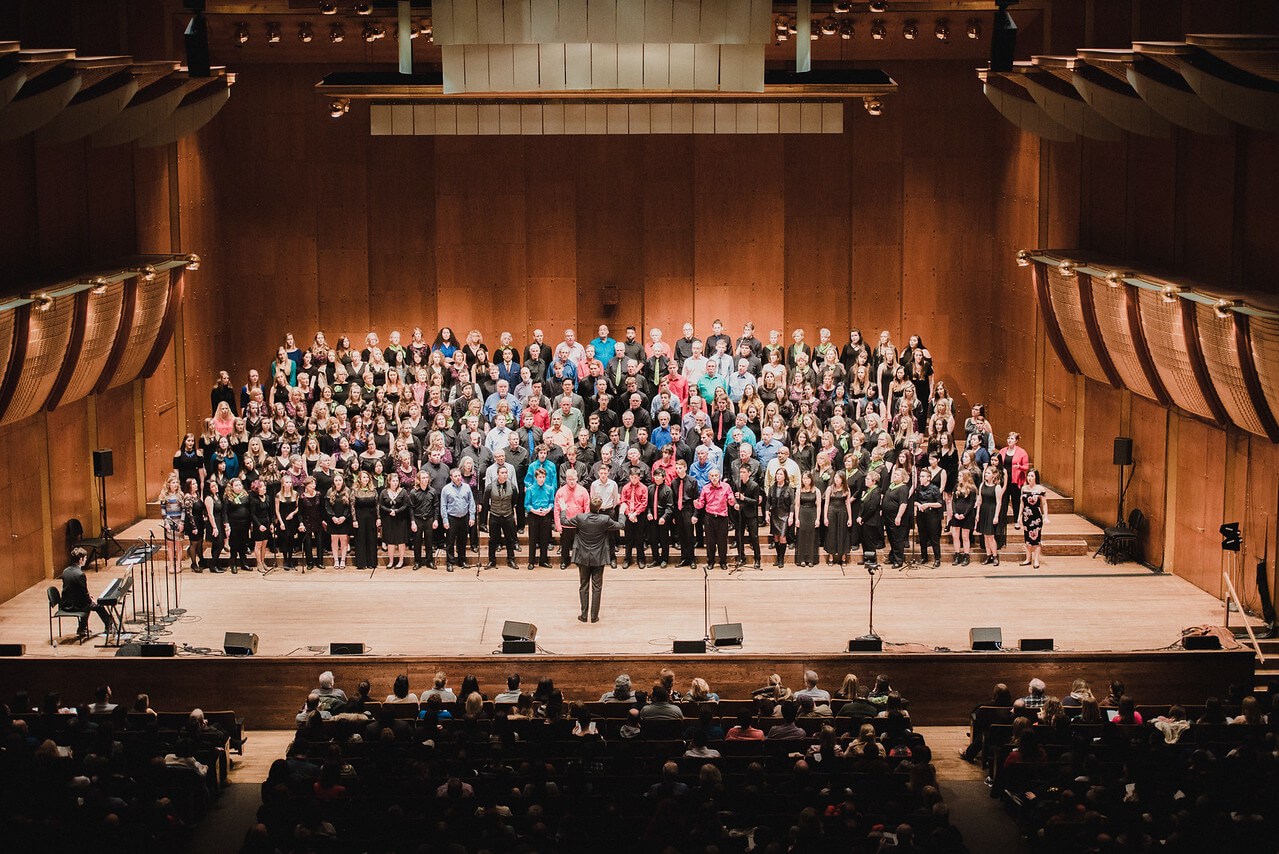